In the Lab: Where Dirt Becomes Data

Back out at Lake Hoare camp, last weekend's whirlwind of lab activity seems like a distant memory. Working in the laboratory at McMurdo connects the fieldwork I've been doing with science--it's the place where we turn samples (say, bags of dirt) into data.

I'm working on understanding the relationships between soil water content, soil chemistry, and biological activity. So how does this happen?

The first step of the task is to find out how much water is in the soil at different times of the year. I can do this by baking the dirt at 105*C (~221*F) to evaporate all the water out (or, in the case of the permafrost, to thaw all the ice in the soil, and then evaporate out the water). By weighing the soil before I bake it, and after I bake it, I can measure the mass of water in the soil. Basically, the process is like making a mud pie.

Once the soil is dry, there's all kinds of things you can do with it. I usually take a picture of the sample, so I can remember what it looked like (was it powdery, or sandy? clayey or rocky). It's important to document everything, since I processed 71 different soils this past weekend. 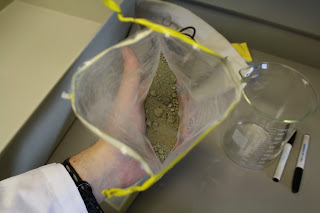 A sandy, silty soil with a few pebbles.
The next step is to split the sample, taking a small baggie of the soil to bring back to Oregon for further analysis. We can run some tests on the soil here, but not everything we'd like to do. I also take a small amount of soil to burn. Everyone's heard of a mud pie, but charbroiled dirt is a little unusual! By cooking the sample in a furnace at a high temperature, I can burn off any organic matter in the soil (microbes, algae, etc.). We need to do this to get a measurement of how big the biological community in the soil is.
Then it's time to soak the soil again. I know what you're thinking--didn't you just dry the soil? Once the soil is dried out, it's time to look at the chemistry of the dirt. I'm most interested in what happens to the soil when summertime snowmelt and ground ice melt dampens the soil. To simulate this, I precisely weigh out water to mix with the dirt. The water is super-clean water that has been filtered to remove nearly every chemical impurity. When salts dissolve in water, they form ions-- for example, table salt, sodium chloride, dissolves to form a positively-charged sodium  ion, and a negatively charged chloride ion. This super-clean water is called "deionized water." 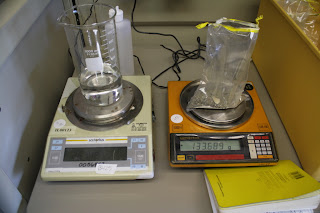 Weighing out water and soil. Two parts water to one part soil should do the trick!
By adding my imaginary snowmelt to the soil (mixing deionized water with the soil), I can dissolve all the salts that were present in the soil when I collected it. Some of the salts were carried to the soil by the wind all the way from the ocean (lots of the sodium and chloride), while others were actually leeched out of the sand and pebbles that make up the soil by the meltwater (much of the magnesium and iron). Salts matter here because they help generate meltwater (the same way salting the roads when it snows raises the melting temperature of ice, allowing it to melt away faster). I shake the bag to mix it all up, and then let it settle for a little while so that the sediments (all the sand, silt, pebbles, etc.) can settle to the bottom of the sample bag. 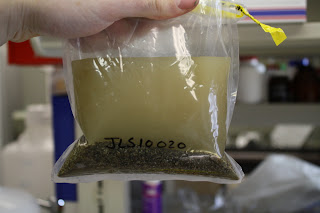 Joe's artificial mud: special recipe.
Some of the murkiness of that mud comes from the fact that it's not just sand and salt and water in the bag, but also organic compounds. Nutrients of all kinds are found in the soils of Taylor Valley, and help sustain the organisms that live here. Just like gardeners back home, we're really interested in how much phosphorus and nitrogen is in our soil.
Now that I've made something of a mess, it's time to clean things up. Our analytical machines can't make sense of thick, gooey mud, so I need to filter the water. We use filters that are so fine that no sand fragments can pass through, but that have big enough holes to allow the various salts to pass to the other side (the holes are 0.45 microns across, or about 1/2,000,000th of a meter wide). 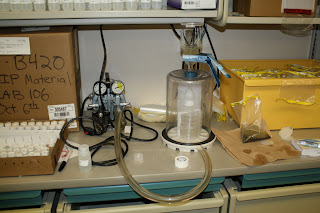 Filtering mud. The doodad with dials is a vacuum pump that sucks the air out of the jar to the right. The sample sits in a little funnel attached to the top of the jar, separated by the filter, and gets pulled through the filter by the vacuum on the other side. It's like a super-powered coffee filter, separating the soils (here, soil) from the liquid.
Sometimes, the soil is sandy and rocky, and doesn't make a thick mud. Those samples filter very quickly. Other samples are thick and gooey, and can take a long time to filter, even with the vacuum pump going full tilt. 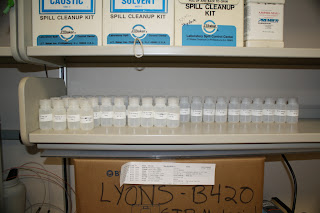 Looks like it's going to be a long day of filtering....


Once all the bottles are filled with salt water from the soil, they'll get analyzed by our chemist, Kathy Welch. What we'll learn from the samples is how much salt, of several different varieties is in the soil here. Understanding how salt has been sprinkled over the landscape is one of the keys for figuring out who lives where, and where the water will flow.
Posted by Joe Levy at 4:47 PM