Next stop, Antarctica! I’m starting the trek down to the McMurdo Dry Valleys today. If everything goes well, I should be arriving in Christchurch, New Zealand on December 2 (everyone should enjoy December 1st for me—I’m going to lose it entirely when I cross the international date line!), and will head to McMurdo Station on December 4. 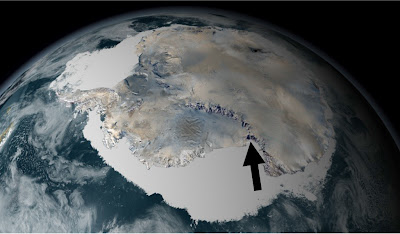 We're heading here. Soon. Image courtesy NASA Goddard.
The Cold Dirt field team has doubled in size again, which means I’ve got an outstanding roster of scientists and students (and even an artist) converging on the Antarctic Dry Valleys from all over the country. We’re focused on two big projects this year: 1) sampling the buried ice sheet that was trapped in Garwood Valley during the last ice age so we can determine where the ice came from, and 2) exploring the hidden groundwater system that sustains life in Taylor Valley soils. Whenever internet access is available, I’ll keep photos, videos, and reports from team members up-to-date so you can follow the adventure online.

The first half of the team will meet in Los Angeles this afternoon to fly to New Zealand. The advance team members include:

Kelly Hughes, a graduate student at Portland StateUniversity. Kelly works with Andrew Fountain (who will be joining us later in the season) and is working on a thesis related to ice, groundwater, and geochemistry.

Jay Dickson, a veteran of many Antarctic field seasons (including last year’s season in Garwood Valley--and seriously, follow that link, I love the headline). Jay is a researcher at Brown University and is leading the time-lapse camera experiment that is recording dramatic erosion in Garwood (more about that later!).

Lily Simonson, the expedition artist. Lily is a painter whose recent projects have included renderings and interpretations of sea life collected during research cruises (also sponsored by the NSF). Lily is at the forefront of sharing the complexity and beauty of the natural world through art. You can see some of her ocean creature work here.

It’s just about time to catch the first flight. Stay tuned, though—we’ve got a live video chat from Antarctica scheduled for a week from today with students at Christa McAuliffe middle school in Florida. Keep those questions and comments coming!