After eight great days in the Garwood, the team and I have moved to Taylor Valley (where I was based last year) for a change of pace, some new soils and rocks to samples, and of course, to get access to the internet, so I can upload images to this blog. We had a tremendous week of fieldwork, and are looking forward to looping back through at the end of the month to finish this year's research.
Here's a few 3D images of what we've been up to. You'll need red-blue 3D glasses to see the view in stereo, but without them, you'll get some idea of the scenery. 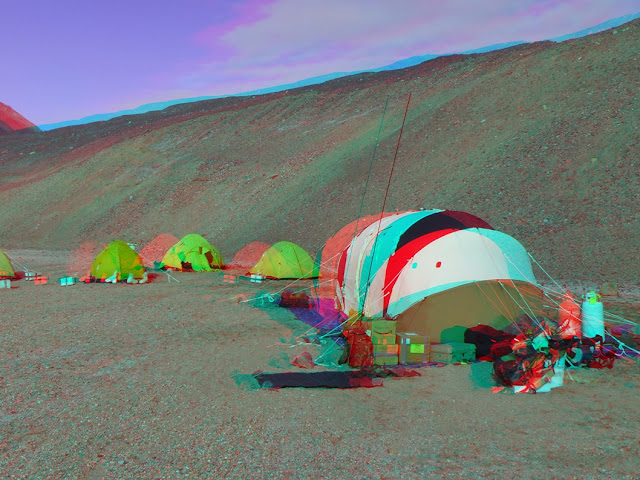 Here's home-sweet-home in the Garwood, our camp. We're on the Garwood River plain, in front of the buried ice (that helps keep the wind down). The big tent near the camera is an 8 by 21 foot "Endurance" tent, where we cook, eat, and repair our science gear (it's also our lab, in a pinch). The big antenna next to it is an HF radio for calling back to McMurdo. Behind the Endurance are our bedrooms--each team member gets his own little tent to sleep in. The sand is the valley is pretty soft, making for a cozy night's sleep in a sleeping bag. 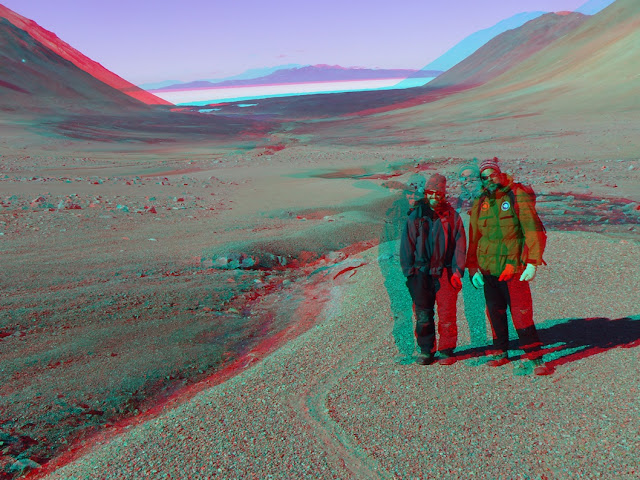 This shot shows two team members, Dr. Andrew Fountain (on the right) and James "Jerome" Bethune on the left. James just finished college and is here working with Andrew and I as a field hand, and on some research projects related to how different geological surfaces become better or worse homes for algae. They're standing next to the track of a seal (to the left) that crawled its way inland from the sea (nobody knows for sure why they do this some times). The "ice cored drift" is behind them, and beyond that, the Ross Sea (covered in ice) and the Brown Peninsula. 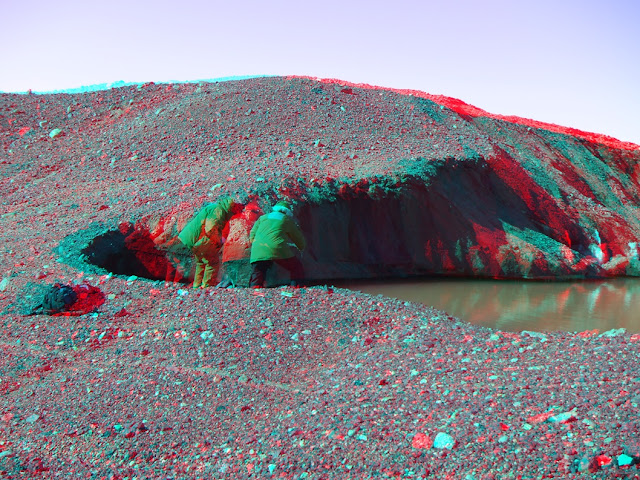 Here's Berry Lyons and his student Julie sampling a "thermokarst pond" in the buried ice. When the ice melts, it can leave behind a hole that fills up with the meltwater. There's ice exposed behind them, that's feeding the pond. We're trying to learn how these ponds form, and why different kinds of algae chose to live in one pond and not another (some of the algae has wild colors--tye-dye reds, greens, and yellows). 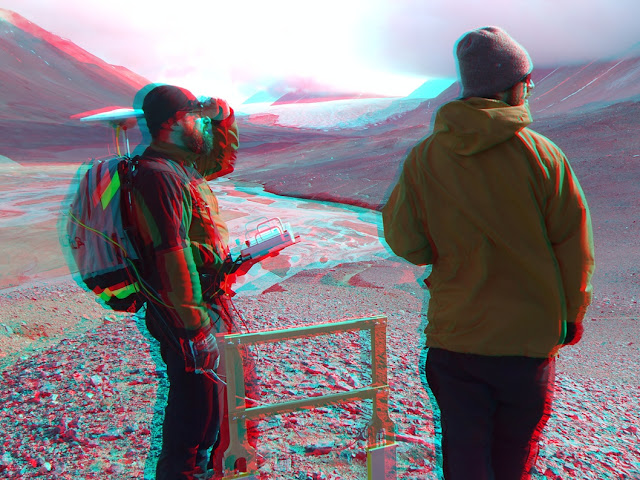 This picture shows Dr. Rickard Pettersson and Jerome working with the ground-penetrating radar. Rickard is carrying a very precise GPS so we know exactly where he's scanned. The radar bounces radio waves off the different layers in the ground (soil on top, buried ice, the bedrock below) so we can measure how much ice is in the valley, and how many different layers are in the deltas. It's a heavy pack to haul all over the Garwood, but Rickard (who's joined the team from Sweden) doesn't mind working hard, or thinking through hard scientific problems.
The only team members I haven't shown you are Jay Dickson (who is making some amazing time-lapse movies of the "ice cliff" melting) and Thomas Nylen (who is managing the weather station in front of the buried ice). I'll post pictures of them in action, and some of the data they've gathered in the next post. 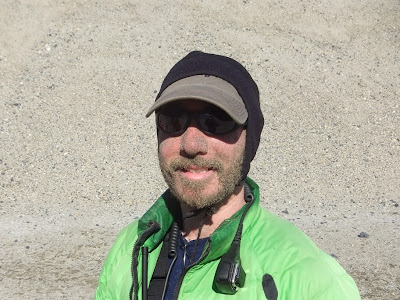 After working hard all week, the only task remaining was to load up our gear into a big cargo net and to wait for a helicopter to fly us and our camp equipment to Lake Hoare. The Bell 212 is an extremely powerful helicopter that makes a lot of wind as it lifts 1900 pounds of tents, fuel, rock samples, and duffel-bags. It's important to watch the helicopter take off to make sure that the cargo net stays safely packed and away from any obstacles (like the wall of ice next to our camp). The Garwood is a very sandy valley, and, as the winds roared while the helicopter took off, I managed to collect one last sediment sample in my beard. Nothing quite like playing in the dirt.
Posted by Joe Levy at 1:21 AM