It’s funny how one word can mean two exactly opposite things. I’m at McMurdo Station, waiting to kick off this year’s research program in Garwood Valley (one of the southern McMurdo Dry Valleys). My team and I arrived last Monday, and have spent the week assembling our camp gear, testing scientific instruments, and packing up food and supplies. We hit the ground running, with the goal of being Garwood-bound on Friday, January 6th. But, weather (it’s been snowing quite a bit lately), coupled with a tight helicopter usage schedule, and mechanical problems with one of the big Bell 212 helos that we need to move our camp in, have kept us McMurdo-bound this weekend. The good news is, if the snow clears, we’re on the schedule for Monday, and can get rolling with our science! (The other good news is that the McMurdo galley has the best brunch below 65*S, so it’s a treat to be able to have a few more days of delicious chow before the menu changes to camp cuisine).

This is the view out my lab window at McMurdo. That bright white space in the background is the direction I need to be flying, and those little flakes in the foreground are getting in the way!
What’s this season all about?
During the last glacial maximum (the LGM, which was the peak of the last ice age), about 20,000 years ago, Antarctica was a colder place than it is today. The ice sheets that cover the continent grew in the cold, and like giant glaciers, came pouring out of the high interior mountains of Antarctica and flowed down towards the coast. During the LGM, so much ice came flowing out of west Antarctica that it literally filled up the Ross Sea. The flood of ice spilled up into the valleys that surround the Ross Sea—so much ice was draining into the region that the glaciers flowed up hill!
But then the planet began to warm up again. The ice age was waning. The “grounding line,” which is the point where this wall of ice met the ocean, began to move back inland. Ice drained from some of the flooded valleys (but not all—Garwood being one that kept its ice). This is where Garwood Valley becomes important. Warming climate conditions stopped this flood of ice in its tracks, melting back ice that been streaming out of the West Antarctic ice sheet. Today, scientists are concerned that the West Antarctic ice sheet is experiencing so much warming that it may melt back catastrophically. When the ice melts, the water pours into the ocean, raising sea level. 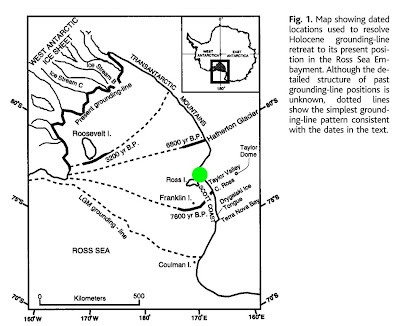 This is a map from Conway et al. (1999) showing where the "grounding line" for the West Antarctic ice sheet is thought to have been over the last few thousand years. Garwood Valley is the green dot.
One of the big goals of this project is to help understand when, and under what temperature conditions, did the West Antarctic ice sheet flood into the Ross Sea region, and when, and under what temperature conditions did it get melted out. By Understanding the West Antarctic ice sheet’s response  to past warming, we can inform predictions about how it will respond to future warming.
So, what’s a geologist doing all caught up in a story about glaciers and ice? As it turns out, Garwood Valley is a sticking point for the West Antarctic ice sheet as it came flooding out to sea. (Garwood is the green dot on that map). When the ice flooded into Garwood Valley, it dammed a tiny river that is fed by a glacier in the valley (the Garwood River). Like sticking a plug in a bathtub drain, the ice dam held back the water, causing a lake to rise in the valley. Eventually, a large delta grew in the lake where the river entered it, dropping off sediment every year during the summer melting season. 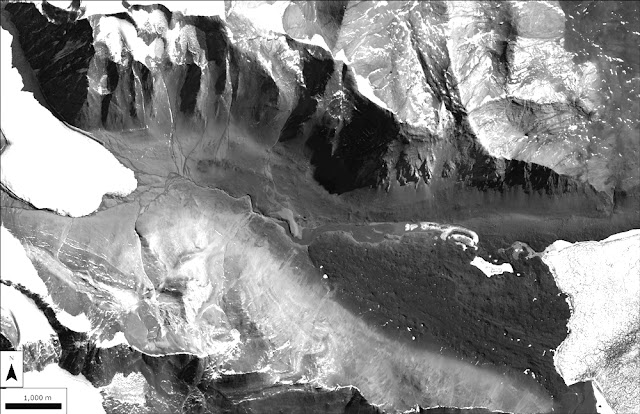 This is a satellite image of Garwood Valley. To the right is the modern Ross Ice Sheet (the sea). The tongue-shaped thing left of that is buried West Antarctic ice sheet ice. To the far left is the modern Garwood Glacier. Snaking its way down to the sea is the modern Garwood River.
This lake is one of the keys to figuring out when the ice flooded in, when the ice melted out, and what the temperatures in the Dry Valleys were like when all this happened. As the lake grew, algae living in the delta were buried, along with the shells of microscopic organisms that produce calcium carbonate shells. The age of these plant remains (algae and carbonates) can be determined by carbon dating, and by uranium-thorium dating. Since the lake deposits are actually sitting on top of the ice plug (more about that in another post), the lake deposits have to be younger than the ice flood, giving a minimum age for when the valley filled with ice. 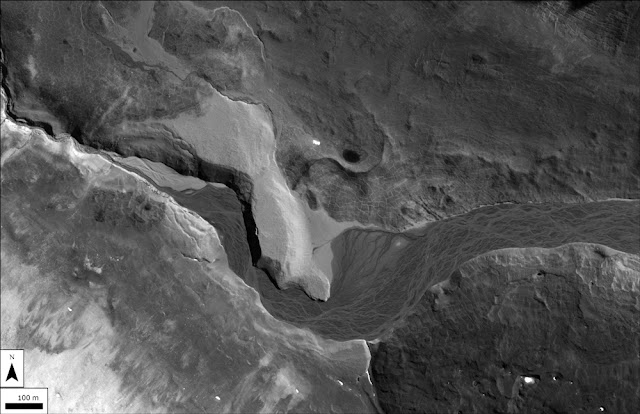 Right in the middle of this zoom you can see the deltas. The river bends around them. Looks pretty wet, doesn't it?  Thanks to Paul Morin and PGC for the great satellite images!
What happened to the lake? We can tell that the lake drained by cutting through the ice plug because the deltas get lower and lower as they get younger and younger. In order for the lake to drain, there has to be somewhere for the water to drain to. If the grounding line hadn’t moved past Garwood valley, the lakes could not have drained into the open ocean. So by dating when the lakes drained, we can learn when the ice had melted back past Garwood Valley.
Best of all, because the chemistry of the lake sediments can be used to figure out what temperature the water was, we can figure out what the climate was like when the ice filled the valley and when it left. I really like it when rocks can tell us something interesting about ice!
And, of course, if you don’t entirely believe the history I just told you, here’s one last bit of evidence. The ice that flooded the valley during the LGM is still there. It’s buried by delta sediments, and is rapidly melting away where it’s been cut into by the modern Garwood river. We’re trying to figure out just how fast this old ice is melting, so we can know how much longer it will be around, and what will happen to buried ice like it elsewhere in the Dry Valleys when temperatures start to rise.

This is the famous Garwood Valley "Ice Cliff." That's buried ice that got its start deep in West Antarctica, topped by layers of river-deposited sediment. I'm there in green, next to Andrew Fountain (from Portland State University), and Thomas Nylen (in blue). Thanks to Jim O’Connor of the USGS for the awesome photo, and for extensive amounts of insight in piecing together the geological history of the valley.
Posted by Joe Levy at 4:25 PM