Today, it's finally time to talk a little bit about dirt. I've been tramping back and forth over the soils of Taylor Valley this past week, collecting permafrost samples (remember, permafrost is just a land surface that's been below 0*C/32*F on average for more than two years running). I just downloaded the temperature record for the last year from a sensor bundle that we left out over the winter (when it was just too cold and dark to be here). As you can see from the graph below, this is a serious permafrost environment (for the record, the average annual temperature here is about -18*C/0*F--right now, most of the soils are around -20-30*C, which makes for some cold walking!) 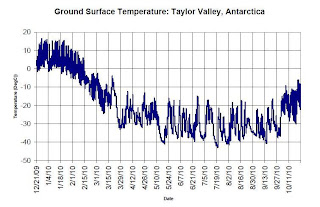 So what are these soils, and why am I so interested in them? Basically, the soils of the Dry Valleys are sands. Antarctica is a cold desert, so sand kind of makes sense, right? Actually, the reason that it makes sense--not all deserts are sandy--is because very little lives in the soil here. Microorganisms, plants, animals and fungi all break down rocks and minerals (and other organisms) at warmer latitudes, to produce a complicated, carbon-rich soil. Here, because of the cold, and because of the dryness, very little biological work occurs. As a result, the soil is mostly made up of sand blown in by the wind or carried in by old glaciers, ancient lake and ocean sediments that have been sitting around for thousands of years, and rocks and boulders that have fallen down the steep valley walls. As a result, the soils look a lot like this (that's a ~2 cm diameter rod in the middle of the picture): 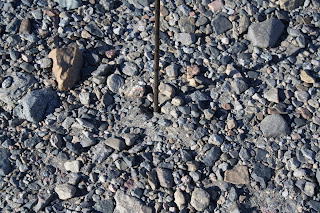 You might think that looks really rocky, and there's a reason for that. If you were to take a shovel-full of Taylor Valley dirt, you'd find that it's about 70% (or more) sand (geologists have a very precise definition for sand: rock fragments smaller than 2 mm across. But generally, you know sand when you see it). So where's all the sand in that picture? The winds here are persistent (you may notice I talk about the wind a lot). The wind blows the fine grained sand away, leaving behind a lag of rocky debris at the surface. Anywhere there is sand to blow away, the wind takes it, leaving an interlocking group of pebbles and cobbles that looks like a jigsaw puzzle or a mosaic. This material is called "desert pavement."

The other kind of "pavement" that I'm interested in here is called "ice cement." Even though the soil at the surface is very dry, if you dig down a little bit, you quickly find that ice has filled the pore spaces between sand grains. The ice has condensed there because the ground is so cold (the same way condensation forms on  a glass containing a cold drink--the glass is much colder than the air, so water vapor gets "cold trapped" and condenses from water vapor to liquid water--or in the case here, as ice). The ice fills up the spaces between sand grains (the pores), the same way water fills up the pores in a sponge.

This ice-dirt mixture is extremely hard (that's why we call it ice cement). When I talk about "sampling" ice cement, it means whacking it with a pick ax to dislodge fragments that I can dry (to measure how much ice was in them when they were frozen) and then re-wet to dissolve all the salts and other nutrients in the soil, which my colleagues will then analyze later this season.

The permafrost is hard-frozen now, but when it melts later in the summer (you can see on the graph at the top of this page that sometimes the ground is well above freezing), it will become soggy and soft--the perfect environment for algae, microbes, and even tiny worms called nematodes. These critters form the southernmost biological community on Earth, and are the focus of LTER research. My job here is to understand the permafrost that is these organisms' home. We're trying to understand how water moves in and out of the soil, and how heat moves in and out of the soil, over the course of years, decades, and even centuries. Here at the extremes of the Earth, heat plus water plus light equals life. Right now, we've got the light, and plenty of water. The soil is just waiting for heat from the sun to work its ecosystem magic.
Posted by Joe Levy at 9:07 PM