Hailing frequencies open (from the field!)

Hello from Lake Hoare! This blog post comes to you live from the McMurdo Dry Valleys--Taylor Valley in particular. Camp is a gathering of huts (labs, cooking and eating spaces, generator, storage) and tents (for sleeping), situated at the toe of the Canada Glacier. Upvalley (to the west, away from the shores of the McMurdo Sound and the Ross Sea) is the Suess Glacier. In between these two giant ice conveyor-belts sits Lake Hoare, one of the famous ice-covered lakes of the McMurdo Dry Valleys. 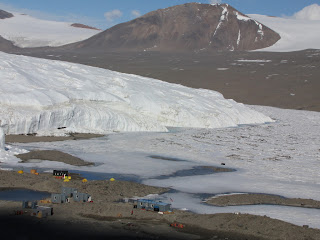 We're celebrating the hundredth anniversary of the exploration of Taylor Valley this year, and explorers and scientists have been visiting the valleys regularly since (with particular interest in the Dry Valleys begining in the late 1950s). In one sense, the McMurdo Dry Valleys are very well understood. The valleys are "dry" because they are not covered by the Antarctic ice-cap (more than 99% of Antarctica is buried by the ice cap)--the glacier-like cap is held back from the Valleys by the tall Transantarctic Mountains that hem this side of the Ross Sea. The Dry Valleys aren't "dry," though.

As you can see in the picture, alpine glaciers (like the Canada) flow down the valley walls and spread across the valley floor. During summer months (December to February), the snouts and surfaces of these glaciers melt, generating streams that flow into low points between the glaciers, forming ponds and lakes. Because the average annual temperature in Talor Valley is -18*C (about 0*F), with summer air temperatures seldom rising above ~10*C (40*F), these ponds and lakes are perpetually covered by thick, floating ice covers. The Dry Valleys are "dry," though, in that they recieve very little precipitation: 3-50 mm of "water equivalent" snow per year ("water equivalent" means that you imagine melting that snow once it fell on the ground to form a height of water--just like when the weather report says that a storm dropped 1/2" of rain. Snow is puffy and low density, so it's difficult to describe how much fell unless you make this conversion.) One or two recorded rainfall events have occured in the whole history of the Dry Valleys (down at the coast), while some higher, inland areas have not seen substantial liquid water in millions of years.

What's missing from this short accounting of the history, geography, and climate of the Dry Valleys is permafrost (and biology--more about that later). Everything that you see in that photo that is not a glacier, lake, snow, or human structure is permafrost. Permafrost is nothing more than a ground surface that has remained below freezing, on average, for more than two years. Perennially frozen soil is my specialty, and is the reason that I've come all the way to Antarctica. Permafrost is the "dirt" in "Cold Dirt," and I'll be talking more
Posted by Joe Levy at 11:20 PM